This edition of WWDC keynote bingo presented some challenges. In the past, there’s been more than enough rumor and unfounded hype to fill the board. This year, the near certainty of the 3G iPhone combined with the absence of any remotely credible reports of other exciting announcements has made square selection a struggle.

The bigger problem (if you can call it that) is that, in the past decade or so, Apple has fulfilled almost every long-standing product fantasy. A modern OS, crazy new case designs, x86 CPUs, a set-top box, a hand-held video player, a phone, a Newton successor (n.b., “successor,” not “clone”), a sub-notebook…what’s left, really?

Well, there’s the xMac, I guess (don’t hold your breath). Then there’s the Mac tablet, though even that one’s lost some of its luster in a post-iPhone world. For OS nerds, there’s a new kernel, file system, and similarly esoteric stuff—hardly keynote-worthy. Then, of course, there’s the Amazing New Thing That No One Expects, but that doesn’t really help make bingo squares.

In the end, I found enough to cover the board by sticking to three themes: iPhone stuff (yes, “3G iPhone” gets a square), the next major release of Mac OS X, and the rumored .Mac changes. Still, I think we as a community need to come up with some new Apple-related pipe dreams.

Another problem was that my bingo board design idea didn’t lend itself very well to making an actual bingo board. It was more of a “poster idea,” really, so I’m offering it in both forms. You can download the usual bingo board, and you can also download the board background image as a separate file. Both are in PDF format, as usual, for easy printing. If you’re attending WWDC and you’d like to perhaps print out a few copies of the “poster” and surreptitiously pin them up around the conference corridors, you might fool a few of the iPhone-spawned WWDC newbies into mistaking them for some weird part of Apple’s official marketing materials.

Finally, as I’ve shown the card around I’ve been surprised at how few people get the reference. In case you’re not as irretrievably immersed in all things Apple as I apparently am (or if you’ve just blocked out all memories of Apple in 1990s), the poster design is a play on the infamous “Pray” cover from the June 1997 issue of Wired magazine. (It’s actually infamous, I swear! Wired even revisited it recently with its own follow-up story and cover homage.) Further analysis of the image is left as an exercise for the reader.

Anyway, to the downloads:

Hover your mouse over the image below to see the poster version. 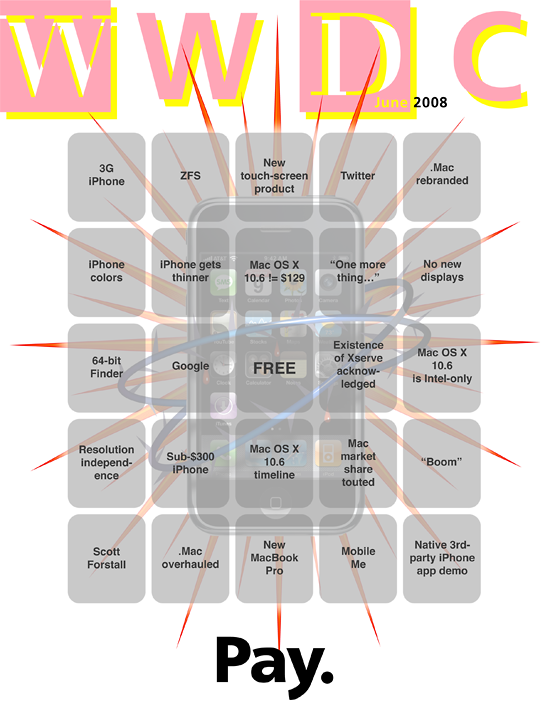 For a refresher course on the rules, please read the inaugural WWDC bingo post from 2006. To learn why there’s only one card, see the MWSF 2007 bingo post. Remember that this game is about what happens during the keynote only. It doesn’t matter what Apple releases or announces through any other channels. The only thing that matters is what happens on that stage during the keynote.

The requirements for each square are listed below. Note well: for the purposes of this entire board, “Mac OS X 10.6” refers to the next major version of Mac OS X, whatever its version number or designation. Good luck!