Night of the living xMac

Just when I thought I was out.

This is the second post in my ongoing series pondering the Intel Macs of the future. In part one, I considered the professional line. Today I’ve got something on my mind that’s a bit harder to pin down: the xMac.

Long-time readers are probably already familiar with the concept of the xMac. As far as I know, the term “xMac” was coined in the Mac Ach right here at Ars. I tried to find the exact post but, well, long-time readers also know what the forum search is like. The earliest post I could find that mentions the xMac was made by Jade on November 28, 2001, and it doesn’t even explain the term. This leads me to believe that this post is not the origin of the xMac meme. Anyway, in a post made the next day, Jade adds this description: "$1000 xMac: gamer/burner/music machine."

The xMac saga continues on from there, across ninety-six pages of search results spanning almost four years. During that time, the xMac was tossed like leaf in the wind in the Mac Ach. The xMac is an iTunes device. It’s a game machine. It’s a sub-$1000 Mac. No, it’s sub-$500. It’s a floor wax, a dessert topping. The xMac is all things to all people!

Eventually, as will happen with any long-running forum topic, everyone pretty much forgot how the whole thing started. (Well, I did, anyway.) Discussion of the xMac continued, but each reader likely had a slightly different idea of what, exactly, that term meant.

Things finally came to a head with the run-up to the introduction of the Mac mini. A thread named Headless xMac confirmed! (Sub $500 Mac) chronicled the final days. But even then, there was debate about what would constitute vindication or defeat for proponents and opponents of the xMac idea—both its likelihood of becoming a reality and its intrinsic value as a product idea. In the end, it was generally accepted that the Mac mini was “close enough” to being the fabled xMac, and the matter was (blessedly, most would agree) closed.

Well, I’m bringing it back. As far as I’m concerned, it never left. My own personal conception of the xMac does not match-up well with the Mac mini. I’d go so far as to say that my xMac vision is also a lot closer to the original concept of the xMac…except I’ve already established that I’m not sure exactly where or when the xMac idea originated, so never mind.

I do think that all of the variations on the xMac idea have one important thing in common. It seems like everyone can agree that the xMac is “headless.” That is, it has no integrated display like the iMac or a laptop. A corollary that is also widely agreed upon is that the Power Mac, as it currently exists, is definitely not the xMac. That leaves the consensus description of the xMac as “a headless Mac that is not the Power Mac.”

By that definition, the Mac mini fits the bill. Technically, the Power Mac G4 Cube also qualified. Despite the name, it was definitely not like the Power Mac (i.e., a full-sized tower). But the Cube is not my xMac either.

Here’s what I want. Start with a choice of two possible CPUs: the very fastest single CPU Apple sells, and the second-fastest. In contemporary terms, these would both be dual core CPUs. The internal expansion buses should also be top-of-the-line, but with less capacity than the Power Mac. One high-speed slot for the graphics card and at least one other, slower slot for another card would be fine. RAM capacity should be roughly half that of the Power Mac. There should be room for two internal hard drives and a single optical drive.

External expansion should be similar to the Power Mac, but with fewer of the “expensive” ports (e.g., FireWire 800) and more of the cheap ones (e.g., at least three USB ports). It should be wireless-capable, both long- and short-range. The short-range capability should be standard. (BlueTooth, in today’s terms.)

Then there’s the case. It should be much, much smaller than the Power Mac’s full-sized tower. Think Shuttle-sized, but styled like a Mac. The Shuttles are nice, but they’re shaped too much like shoe boxes for my taste. The xMac should be distinctive, like the mini. Maybe that means a pizza-box form factor, or maybe a skinny, upright mini-tower, I don’t know. I trust that Ive can think of something.

So far, this xMac sounds like a product between the Power Mac and the iMac, which is probably a good idea. There’s a bit of a hole there in Apple’s line-up. But there’s One More Thing…

You know those build-to-order options I mentioned? When I said that they should “span the entire range,” I meant the entire range. No, I’m not talking about the high-end. Think in the other direction. Think of the top item in a BTO pop-up menu. Now picture this: 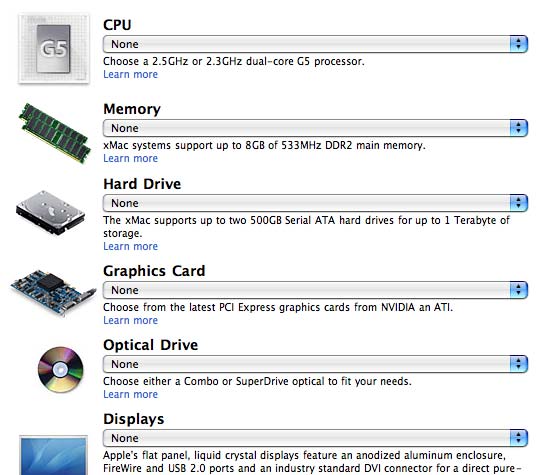 Ladies and gentlemen, I give you the xMac. My xMac. The Mac that I want to buy. Reduced to one sentence, it’s a completely configurable, headless Mac that trades expandability for reduced size and cost.

Now, granted, the hypothetical Apple web store BTO form shown above is less appealing because it’s presented in terms of today’s technology. Who cares if the CPU is optional if you can’t easily buy one from a third party? But picture it a few years from now with a choice of Intel CPUs in that pop-up menu. Suddenly, buying a CPU-less Mac starts to actually make sense.

Well, it makes sense from the perspective of a tech-savvy customer, anyway. Unfortunately, when considered from virtually any other perspective, the idea is a loser. Although it pains me to admit it, I never expect the xMac as I’ve described it to become a reality. Why is it such a bad idea? Let me count the ways.

Nearly all of the consumer benefits of this xMac come at the expense of Apple’s profit margins. Every dollar I can save by only buying exactly what I need, and nothing more, is a dollar that Apple loses. Worse, all this configurability vastly increases Apple’s inventory management challenges, makes reporting more difficult, and increases labor costs. Pre-defined, pre-packaged products are much easier for Apple to deal with, and much more profitable as well. Given all of this, what’s Apple’s motivation to produce such a product?

What about those consumer benefits? Happy customers are good for Apple in the long run, right? True, but will the xMac actually make customers happy? The computer geeks are in the bag, but what about everyone else?

Pity the poor “normal” customer given enough BTO configuration options to hang himself. All consumers want to feel like they’re getting the best possible deal. To a computer geek, that means not being forced to buy anything unnecessary. But to everyone else, that same configurability has the opposite effect, causing worry and doubt. It’s hard to know that you’re getting the optimal combination of parts for your needs when you don’t understand the effect each component has on overall system performance, and you don’t know what a fair price is for each part.

But hey, didn’t I specify two pre-defined configurations for the xMac? Won’t the novices just choose one of those instead? Sure, maybe some will. But that nagging feeling that someone, somewhere is getting a better deal than you is very powerful. Eventually, it becomes an open secret that the way to get the best deal on a Mac is to find a computer geek and have him tell you the exact configuration of xMac you should buy. I’m sorry, but we’ve been there, done that, and it stinks. Apple is supposed to be about simplicity, not hassles—even self-inflicted hassles.

The two points above reinforce each other. As the xMac slowly becomes the obvious sweet spot in the product line-up, it begins to cannibalize the sales of the higher-margin Power Macs, hurting Apple’s bottom line even more. And as more people find themselves shopping for an xMac because they heard it’s the best deal, the formerly simple Apple buying experience becomes annoying and complex for an increasing proportion of Apple’s customers.

As inadequate as computer geeks may find Apple’s current, inflexibly BTO system, it’s just about perfect for most of Apple’s customers. People want some choice in order to feel like they’re in control—even if they don’t exercise it and end up buying a box-stock product from an Apple Store anyway. For those that do choose to build-to-order, the limited choices Apple offers are mostly understandable even to novices. “A bigger hard drive means you can store more stuff.” “More memory means you can run more stuff at the same time.” One or two simple choices are enough. More, and the customer is overwhelmed. Fewer, and they feel too confined.

Yes, it looks like my xMac will have to remain a fantasy. But I’d be happy with a compromise: a completely configurable headless Mac that trades expandability for reduced size and cost. Call it the Power Mac mini, make it cheaper and faster than at least one Power Mac model, and give the “deluxe” version the fastest available single CPU. That’d still cannibalize some Power Mac sales, but it’d also present an opportunity to up-sell iMac and (especially) Mac mini customers. It could still be a net win.

Finally, let’s not forget about the elephant in the room. “If Apple didn’t insist on restricting Mac OS X to run only on Apple hardware, this problem wouldn’t exist in the first place!” Yes, that’s true, but would an xMac by any other vendor be as sweet? Or make Apple as much money? Or dilute the brand by compromising the “Apple experience”? And on and on—this is another topic entirely, and one I don’t want to dive into right now. Suffice it to say that I have a hard time seeing a happy ending to the perennial “Mac OS X on open hardware” scenario right now. But things change, so I’m keeping an open mind.

Anyway, back on topic. The Mac mini didn’t close the book on the xMac for me, but the Power Mac mini might. I know this post was supposed to be about the Intel Macs of the future, but both my xMac idea and its compromised cousin, the Power Mac mini, are CPU-agnostic. Obviously, it’s too late for either of them to arrive in the PowerPC era, so they’re both Intel Mac ideas by default.

I’m sure would-be Mac builders everywhere would like every Mac to be as configurable as the xMac I’ve described. Sadly, I think even one such model is wishful thinking. The more interesting question is this: how many “regular” Mac users out there would be interested in a Power Mac mini?

I’ve always been a Power Mac buyer, but I’ve never actually filled one of those monster towers to the brim. In isolated cases, I’ve maxed-out some kinds of expansion (cough—Power Mac G5 internal hard drives—cough). But I don’t think I’ve ever used more than one expansion slot (not counting the graphics card), and I’m more than willing to sacrifice some of my eight RAM slots (six filled) for reduced system size and cost.

Yes, I’d love to have an xMac, but I’d gladly settle for a Power Mac mini. How about you?