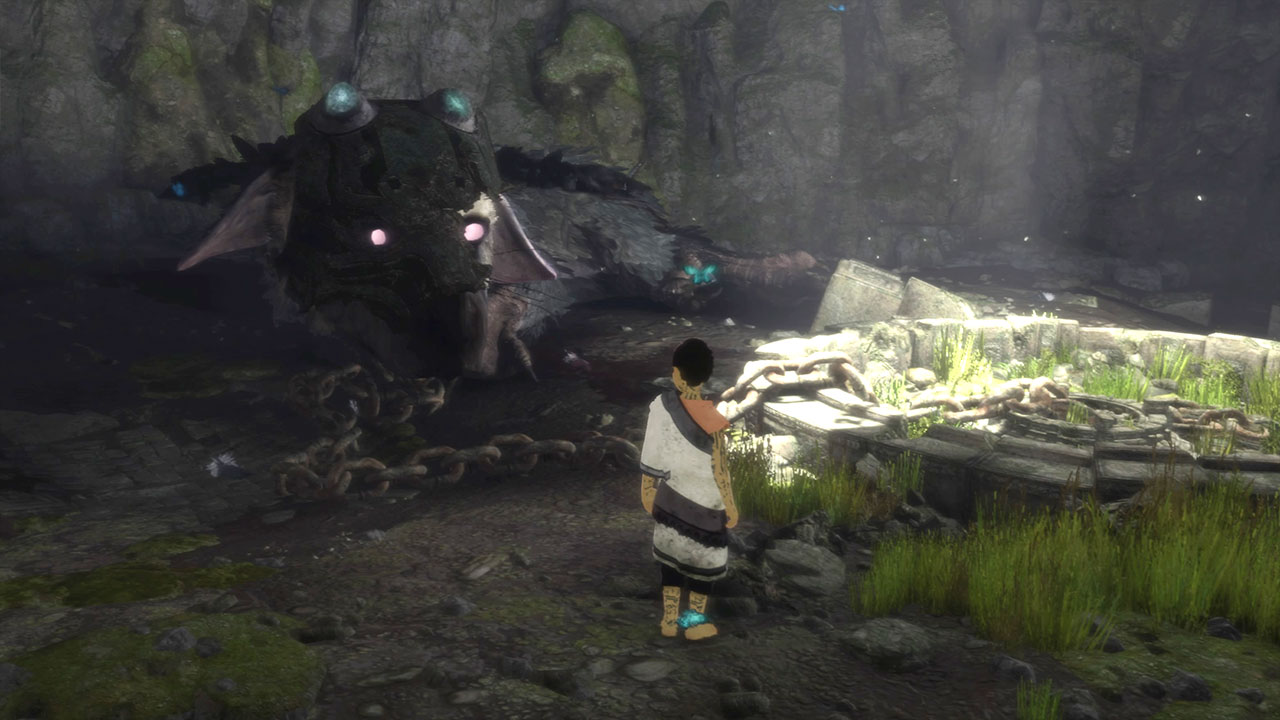 Fumito Ueda’s first game, Ico, was a beautiful, moody masterpiece. Its spare depiction of a boy attempting to escape from a vast castle with the help of a mysterious companion discarded the gameplay and interface conventions of its day, delivering an almost meditative sense of immersion. Ueda’s next game, Shadow of the Colossus, added the bare minimum of status indicators to the screen to support its complex boss battles that required the player to clamber up and onto a succession of giant creatures.

In terms of both gameplay and mood, Ueda’s latest game, The Last Guardian, is a straightforward combination of its predecessors. It features a boy attempting to escape from a mysterious castle with the help of a giant creature. Like Ico, it eschews a conventional HUD, save system, inventory management, power-ups, and nearly every other modern gaming convention. And as in Shadow of the Colossus, players will find themselves scrambling up the back of a large, often uncooperative, incredibly life-like beast (cheekily named Trico).

Ico was able to deliver on the promise of its design by reducing complexity in other areas. It’s set in a largely rectilinear castle that the player navigates on foot. It has a small number of enemies. Its environmental puzzles are mechanically and conceptually simple. Similarly, Shadow of the Colossus manages to pull off its extremely ambitious boss battles by removing nearly everything from the game except those creatures.

While The Last Guardian attempts to combine the strengths of its predecessors, it’s burdened by the combination of their features. The environment and the player’s movement through it is far more complex than in Ico. The puzzles play fast and loose with their own rules at a few critical points. The giant creature, no longer confined to a limited engagement in a boss arena, sometimes pushes the game mechanics past their limits.

Nothing kills immersion more than an acute awareness of the game engine itself. In The Last Guardian, the camera often gets stuck on walls or briefly shows the view from inside Trico. (Spoiler alert: like all your favorite 3D-rendered characters, he’s hollow.) Arguably, Shadow of the Colossus had an even more frustrating camera and control scheme, but that game was released eleven years ago on a far less powerful console. The Last Guardian has made tremendous strides since then, but it’s still not quite enough to avoid illusion-breaking lapses.

These shortcomings are compounded by an uncharacteristic lack of faith in its design. Traditional (read: oppressive) on-screen prompts describing the control scheme mar the opening of the game and are impossible to completely banish. A voice-over extends beyond its narrative role to provide a dynamic hint system that is often too quick to reveal solutions. Several brief cutscenes in quick succession at the start of the game undercut player agency. It's tempting to attribute these lapses to Ueda’s departure from the project several years before its release, but the reason is less important than the result.

Castle in the Sky

All of that said, it’s important to remember the context of these criticisms. Ico and Shadow of the Colossus are two of the greatest video games ever created. Both pushed the limits of the hardware they were released on, and both have influenced video game designers, filmmakers, and other creative professionals far out of proportion with their modest sales numbers. That The Last Guardian fails to resoundingly best its distinguished parents is only disappointing because of how close it comes.

Let’s start with the obvious. The Last Guardian is a gorgeous game. The world design is in line with Ico and Shadow of the Colossus, but the increased fidelity of the PlayStation 4 really makes it shine. (PlayStation 4 Pro running at 1080p is recommended for best frame rates.) Lighting effects that Ico could only dream of add a poignancy to already majestic vistas. At so many points, I wished this game had the photo mode from Uncharted 4.

Trico is an amazing achievement: a building-sized NPC that truly feels alive. Its animations rarely feel canned or repetitive. Its behavioral inscrutability is completely in keeping with its character. Learning to read Trico’s moods and signals is a core part of the game. The experience smoothly transitions from frustration to a deep, intuitive understanding by the end.

Anyone who has finished Ico and Shadow of the Colossus will have no trouble completing The Last Guardian. I found the environmental puzzles a bit more challenging than those in Ico, but I never had to go to the Internet to look up a solution. Anyone who got stuck in Ico will almost certainly be even more stymied by The Last Guardian, however. The hand-eye coordination required is substantially lower than in Shadow of the Colossus, but the camera management and overall control-scheme finesse is much more demanding than in Ico.

Also keep in mind that these are comparisons to the difficulty of two much older games. The Last Guardian has a significant skill-barrier to enjoyment when compared to contemporary console games, especially those with such an artistic bent. Inexperienced gamers looking for a better match for their skills should try Journey instead.

Longtime console gamers who have never played Ico or Shadow of the Colossus should definitely do so, preferably before playing The Last Guardian. High-definition remakes of both games are available for the PlayStation 3 on a single game disc for a combined price of $25. If your taste in games is anything like mine, it is absolutely worth buying or borrowing a PlayStation 3 console just to play these two games. (Plus Journey for just $15 more.) [Update: Both games are also available on the PS4 and Windows PC via the PlayStation Now cloud gaming service, though I have not tried playing them this way.]

If you loved Ico and Shadow of the Colossus, The Last Guardian is well worth playing, but it bears the scars of its nearly decade-long development. Like The Force Awakens, there’s almost no way The Last Guardian could have lived up to the expectations accumulated during the long wait for its release. In the end, its reach exceeds its grasp, if only slightly. But, oh, what a reach it was. Like its star creature, The Last Guardian occupies a lofty perch—defiantly idiosyncratic and occasionally inscrutable, but a towering achievement nonetheless.