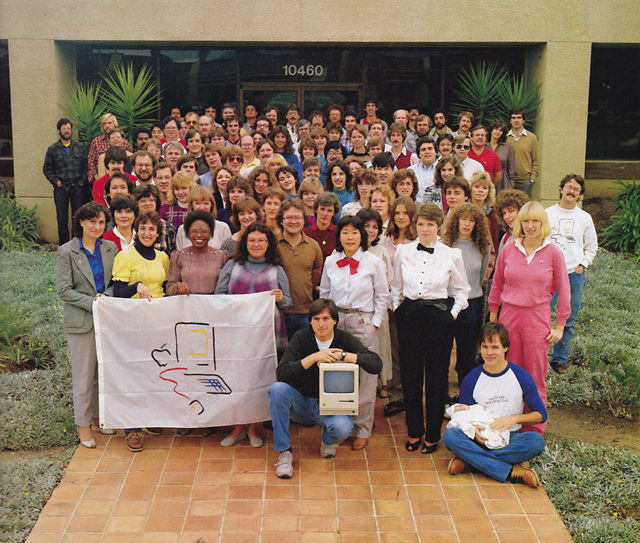 When I was a kid, I had a picture of the original Macintosh team on my bedroom wall. It showed a hundred or so Apple employees standing in front of an office building. Some people on the left were holding a cloth banner with the “Picasso” Macintosh logo on it. A man sitting on the ground on the right cradled a baby. Front and center, crouching with an original Macintosh computer perched on his knee was Steve Jobs, wearing jeans, a long-sleeve black shirt, and gray sneakers.

I was 9 years old at the time. That year, my grandfather had changed my life by purchasing a Macintosh 128K, and convincing my parents to do the same. My grandfather also had a subscription to Macworld magazine, including multiple copies of issue #1, two of which I took home with me. I cut the Macintosh team picture out of one and left the other intact. (I still have both.)

I pored over that magazine for years, long after the technical and product information it contained was useless. It was the Macintosh team that fascinated me. That’s why I’d chosen to cut out this particular picture, not a photo of the hardware or software. After seeing the Macintosh and then reading this issue of Macworld, I had an important realization in my young life: people made this.

The Macintosh was the first thing in my life that I recognized as being wholly new. Everything I’d seen thus far in my nine years had seemed like it already existed prior to my birth—perhaps like it had always existed. But here was something different, something amazing, and this magazine explained how it had been created by this small group of people.

The implications bloomed in my mind. We aren’t stuck with the things we have now. We can make new things, better things. And it doesn’t take many people to do it. The team that had created this mind-bending new machine were all up on my wall, their individual faces clearly recognizable.

And who was the unifying force behind this small band of engineers and artists? Why, the young, boyishly handsome Steve Jobs, of course. Already lionized as a entrepreneurial whiz kid thanks to the blockbuster success of Apple Computer, Inc., Steve was now cast in the role of technological visionary, leading a rebel team of misfits on a mission to create something insanely great. And he did it; the proof was sitting in my hot little 9-year-old hands. People made this.

Fast-forward to 1997. My favorite company was on the ropes, financially, technologically, and emotionally. I was 22 years old, and my finely honed cynicism had put a damper on the romantic notion that a small team of smart people could put a dent in the universe—even one led by Steve Jobs, who had been pushed out of Apple just a year after the Macintosh was introduced.

By this point in my life, I’d also had enough experience with government, corporations, and academic bureaucracies to understand what happens to organizations as they get larger. The middle-managers and empire-builders start to take root. Each problem results in a new guideline or process meant to prevent the problem from ever occurring again. Metrics are added, because managers can’t manage what they can’t measure. Individual incentives shift so far from the stated corporate goal that they actively work against it. Intrinsic motivation wanes. The ability to do truly great work all but disappears.

As it turns out, Steve had another lesson to teach me. He returned to Apple and, well, you all know the rest of the story: iMac, iPod, iTunes, Mac OS X, iLife, iPhone, iOS, iPad. Boom.

My childhood revelation about humanity’s potential to alter its reality had a particular technological focus, but was an otherwise unremarkable intellectual coming of age. But this second and, sadly, final chapter in the life of Steve Jobs rewrote the rule book for the innocent and cynics alike.

In a post-Steve-Jobs world, there is no longer an excuse for large corporations to be less bold than start-ups. Elegance, character, artistic integrity, and ruthless dedication to design can no longer be derided as luxuries of those who don’t have anything to lose. Apple is now one of the largest, most successful companies in the world, but it still behaves as if all of its employees could fit in a 9x7-inch photo.

In an article in the premiere issue of Macworld, members of the Macintosh team were each given a few paragraphs to talk about the project. The very last entry is from Steve Jobs, who characteristically starts by deflecting credit. “The people who are doing the work are the motivating force behind the Macintosh. My job is to create a space for them, to clear out the rest of the organization and keep it at bay.”

He ends nostalgically, a wizened veteran of the tech industry at the ripe old age of 29, contemplating the future of the Macintosh team. “The group might stay together maybe for one more iteration of the product, and then they’ll go their separate ways. For a very special moment, all of us have come together to make this new product. We feel this may be the best thing we’ll ever do with our lives.”

For Jobs himself, at least, it wasn’t. Thank you, Steve, for everything.