Sober predictions for the (rumored) year of the Apple tablet. 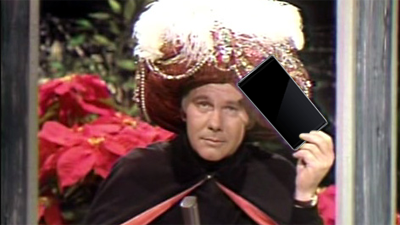 Man, nothing saps my motivation to write like smart people I agree with writing about the same topic. But my feed has turned brown once again in NetNewsWire, so something has to be done. Rather than waxing philosophical about everyone’s favorite mythical product, I’m going to take a more pragmatic approach: bold, concrete prediction!

But first, the obligatory dance. I have no inside information. All of the predictions below are purely speculative. If you don’t want to read yet another blog post about what someone thinks the Apple tablet will be like based on nothing more than intuition and guesswork, click away now. No purchase required. Void where prohibited.

The fevered speculation surrounding the tablet reminds me of the days leading up to the 2005 Tokyo Game Show where the Wii controller was revealed. Remember the Nintendo On video? Okay, maybe the tablet hype hasn’t reached that level yet, but it’s close.

Well let me throw some cold water over all that. As far as I can see, there are obvious answers to most of the common questions about the tablet—obvious and boring answers, that is, which is why everyone wants to talk about more fantastic scenarios, I suppose.

There’s also the popular notion that Apple has to do something entirely new or totally amazing in order for the tablet to succeed. After all, tablets have been tried before, with dismal results. It seems absurd to some people that Apple can succeed simply by using existing technologies and software techniques in the right combination. And yet that’s exactly what Apple has done with all of its most recent hit products—and what I predict Apple will do with the tablet.

That means no haptic-feedback touchscreen, no folding/dual screens, no VR goggles or mind control. Instead of being all that people can imagine, it’ll just be what people expect: a mostly unadorned color touch screen that’s bigger than an iPhone but smaller than a MacBook. If I’m being generous, I’ll allow that maybe it’ll be something a bit more exotic than a plain LCD display. But there are hard and fast constraints: it must be a touch screen, it must be color, and it must support video. (We’ll see why in a bit.)

So how will an Apple tablet distinguish itself without any headline technological marvels? It’ll do so by leveraging all of Apple’s strategic strengths. Now you’re expecting me to say something about tight hardware/software integration, user experience, or "design," but I’m talking about even more obvious factors.

These are Apple’s most important assets when it comes to the tablet, and you can bet your bottom dollar that Apple will lean heavily on them. This, combined with Apple’s traditional strength in design and user experience, is what will distinguish Apple’s tablet in the market. It will provide an easy way for people to find, purchase, and consume all kinds of media and applications right from the device. It’s that simple.

(And if that sounds a lot like what defined the success of the iPhone to you, well, you’re right. But it’s a winning formula, and Apple’s not going to pass it by just to satisfy the technology press’s desire for radical change.)

Apple’s doing the hard work to make all of this happen, of course. That means courting a new class of content owners whose wares are a good fit for a tablet-scale device: print publishers. Apple’s got a lot to offer publishers: millions of existing customers who’ve proven their willingness to buy digital media, relationships with other big media companies to show that Apple knows how to get along in this world, even a CEO who is himself the head of a movie studio and the largest single shareholder of a media giant. Add to that the color, video-capable touchscreen, which current electronic publishing suitors lack, and Apple can now appeal to new kinds of publishers: glossy magazines, comic books, and mixed media hybrids (e.g., People magazine with embedded celebrity videos).

Other tablet-like devices have their own content owner relationships and stores, but none so far have anything to rival Apple’s third-party application might. What Apple has is a platform, with all that entails. And it’s a lot harder to establish a successful platform than it is to make digital retailing deals with content owners.

Apple actually has at least two platforms so far: Mac OS X and iPhone OS. The tablet will add another. Technologically, Apple’s covering itself by basing all its platforms on the same core OS and using very similar APIs. Business-wise, the Mac OS X and iPhone OS approaches are very different. There’s reason to believe that the tablet application development model will closely resemble (or, in fact, be identical to) the existing App Store, but the point is that Apple has the flexibility and demonstrated willingness to tailor each platform according to (what Apple considers) its needs, rather than trying to shoehorn a platform into an existing business practice.

Like I said, it’s all so obvious it’s boring. But even a merely competent execution of this simple plan will result in a product with advantages none of its current competitors can match. And an Apple-caliber execution could really shake things up.

But will it actually be “nothing short of Apple’s reconception of personal computing,” as Gruber opined? What I think he’s getting at is the sentiment embodied by already announced products like the Litl and Google’s Chrome OS. This is the middle ground between the desktop and mobile software platforms, which makes perfect sense for a hardware device that fills a similar position.

The “reconception” part comes in when you consider how many people really need the power—and the complexity that comes with it—of a desktop platform, and in what situations. As a computer geek watching the Chrome OS introduction video, it’s hard not to think about how much easier some people’s lives would be (hi Mom and Dad) if they could trade technical complexities they don’t care about for vastly increased simplicity and ease of use.

I’m not sure Apple is best positioned to effect such a revolution. Certainly, Apple’s the one to do it from a user interface and design perspective, but the server-side component is clearly much more in Google’s wheel house. But in the end, selling the most devices tends to cure all ills. Apple’s real strengths in media and application sales may end up being the tractors that pull its tablet device into eventual success as a general-purpose “post-PC” platform, despite obvious weaknesses in the realm of network services.

I promised concrete predictions, and burying them in a thousand words of rhetoric hardly seems fair, so let’s get on with it. If and when Apple finally does release a tablet product, we’ll need much more succinct statements to quote in triumph…or in shame.

First, the sure things. The Apple tablet will have a color, video-capable touchscreen, about 10 inches diagonal. It will have flash storage, WiFi networking, and few ports and hardware buttons. There will be a software keyboard. Its operating system will be based on the same core as Mac OS X and iPhone OS, and its GUI API will be an evolution of Cocoa Touch. The platform will (eventually) be open to third-party developers. You will be able to buy media and applications right on the device using your existing iTunes account. Some of that media will be new territory for Apple: print media like magazines, newspapers, and books.

Next, the good bets. The heart of the hardware will be silicon designed in-house at Apple by the PA Semi guys. This will give Apple a slight price/power/performance advantage versus other similar devices. Apple will define its own format for electronic print media distribution. It will most likely be based on web technologies, much like the iTunes LP format. Best case (but also the least likely), it’ll be a slightly incompatible extension of the ePub standard. Worst case (and most likely), it’ll be an entirely new format. Either way, like iTunes LP, the format will be publicly documented and there’ll be an SDK available to all interested parties…eventually. It will be possible to port iPhone OS applications to the tablet, though considerable coding and interface work will be required to do so well. Assuming there’s more than one tablet model, Apple will not be afraid to push up against, or even into the MacBook price range with the top-of-the-line tablet.

Finally the wildcards. Cellular networking is the biggest question for me. Though I hope it’s there, and though I think Apple puts itself at a big disadvantage versus existing e-book readers without it, I would not be surprised if the tablet starts out as WiFi only. I think there’ll be a user-facing camera, if not in the first version, then in the second or third. My final wildcard is a hardware keyboard—not attached permanently to the tablet, and certainly not required, but as an optional peripheral. After all, if Apple doesn’t make one, a third party certainly will—SDK allowing, of course.

Despite all the crazy hardware speculation, I think the biggest surprises will be software-based. There’s only so much you can do with hardware within a given price range. Software has far fewer limitations. Think of the prosaic grid of pixels that makes up an iPhone screen. Any hardware vendor in the world could have commissioned the production of such a thing; it’s what Apple did with those pixels in its software that made the iPhone the iPhone. So, too, will it be with the tablet.

Though I feel like I know what to expect in terms of hardware and software capabilities, as well as how Apple will leverage its real and perceived market advantages to position the tablet as a product unmatched by any competitor, it’s learning exactly how those capabilities will be implemented in software that I’m most looking forward to. And if the hardware features a color e-ink screen capable of displaying full-motion video, costs under $300, and comes with free 3G networking for life, hey, I won’t complain. But when it doesn’t…well, take two and call me in the morning.